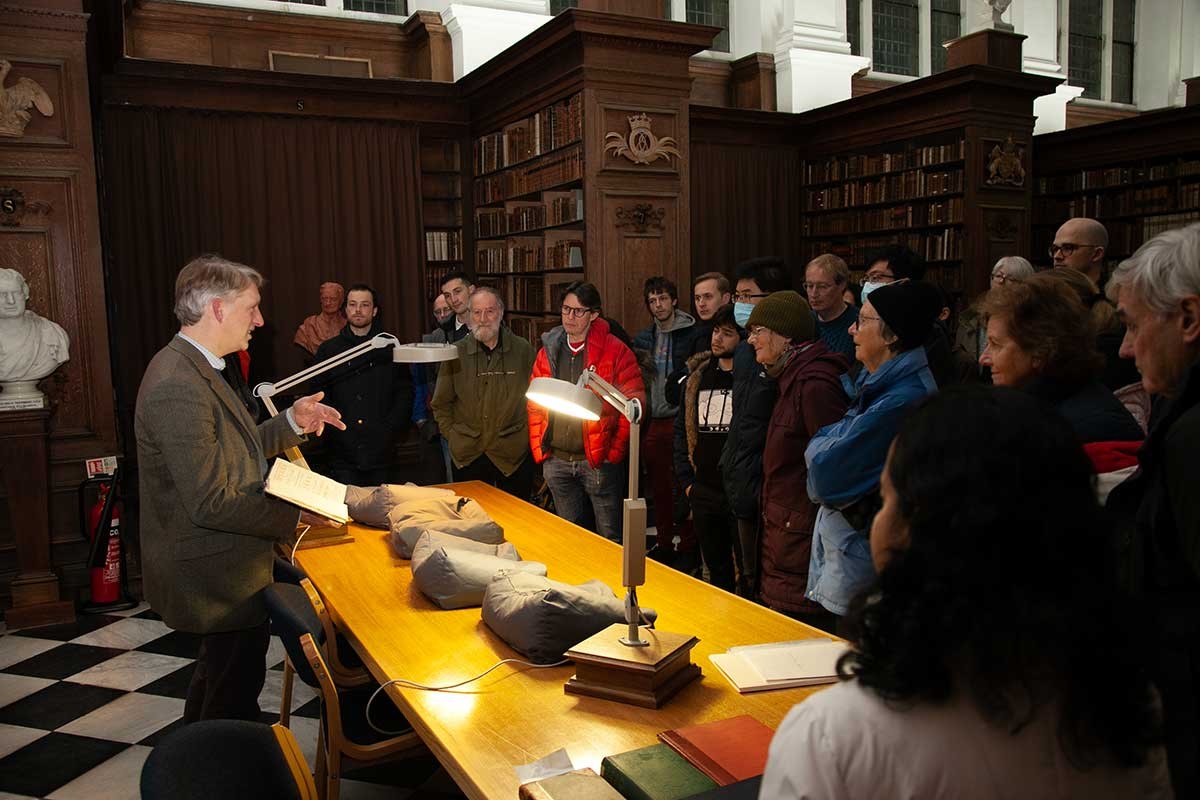 Photo: Dr Nicolas Bell, Librarian at The Wren with Isaac Newton's own first edition copy of Opticks: or, A treatise of the reflections, refractions, inflexions and colours of light.

Following on from our summer visit to the National Museum of Computing (TNMOC) on Bletchley Park, CPS visited the Wren Library at Trinity College Cambridge. The tour was kindly hosted by Dr Nicolas Bell, Librarian at The Wren.

Dr Bell presented a number of items relating to the The Cambridge Philosophical Society, as well as other items which related to Cambridge science during the 200 years of the Society's history.

Of particular interest was a first edition of On the Origin of Species (1859) by Charles Darwin, sent by the publisher John Murray to Adam Sedgwick, Darwin's former teacher and one of the three founders of The Cambridge Philosophical Society in 1819. Sedgwick had made notes throughout the book, commenting on sections of Darwin's hypothesis.

Isaac Newton's own first edition copy of Opticks: or, A treatise of the reflections, refractions, inflexions and colours of light published in English in 1704 was also shown. Newton had made corrections and detailed annotations of revised research in the margins for the second edition.

Dr Bell also produced a number of personal items from the British physicist and Nobel laureate J. J. Thomson, including a Christmas card from Marie Curie, a personal artifact which showed their friendship. Items from George Paget Thomson were also shown.

Growth during the intrauterine period is a critical determinant of life-long health. During this period the placenta acts as the baby’s life-support system, transferring nutrients and orchestrating maternal adaptations to the pregnancy. But what stimulates formation of the placenta? Development of the human placenta is precocious, and for many years was considered the pinnacle of evolutionary advance amongst mammals by providing early and intimate access to the maternal circulation. Over the last two decades our understanding of the physiology of early pregnancy has undergone radical revision. It is now appreciated that for the first three months the placenta is nourished by the secretory lining of the uterus rather than maternal blood. Furthermore, evidence from domestic species and recently derived human organoid cultures indicates that a signalling dialogue operates between the placenta and the uterus, increasing the release of growth factors and nutrients by the latter. In this way, the placenta stimulates its own development, ready to support the baby. Evidence for this concept will be presented, and the clinical implications discussed.

Mitigating mitochondrial mutational meltdown: can we save the species?

Mitochondria are sub-microscopic organelles present in every cell. They convert the breakdown products of food into a form of energy the cell needs to function and survive. An unfortunate by-product is the generation of toxic oxygen free radicals that can damage DNA within each mitochondrion. With a limited capacity for repair, these mutations are passed down the maternal line, where they predispose to disease, can shorten our lifespan, and are threatening our own survival. New biological insights have cast light on the mechanisms involved, but is Homo sapiens facing mutational meltdown?